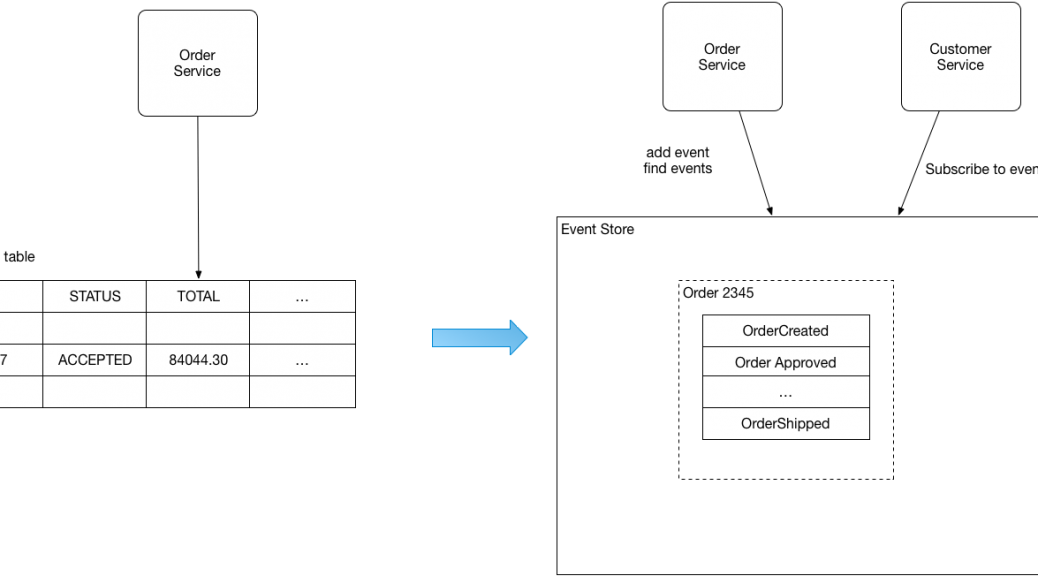 2PC is not an option

A good solution to this problem is to use event sourcing.Event sourcing persists the state of a business entity such an Order or a Customer as a sequence of state-changing events.Whenever the state of a business entity changes, a new event is appended to the list of events.Since saving an event is a single operation, it is inherently atomic.The application reconstructs an entity’s current state by replaying the events.

Applications persist events in an event store, which is a database of events.The store has an API for adding and retrieving an entity’s events.The event store also behaves like a message broker.It provides an API that enables services to subscribe to events.When a service saves an event in the event store, it is delivered to all interested subscribers.

Some entities, such as a Customer, can have a large number of events.In order to optimize loading, an application can periodically save a snapshot of an entity’s current state.To reconstruct the current state, the application finds the most recent snapshot and the events that have occurred since that snapshot.As a result, there are fewer events to replay.

The following diagram shows how it persist orders.

Instead of simply storing the current state of each order as a row in an ORDERS table, the application persists each Order as a sequence of events.The CustomerService can subscribe to the order events and update its own state.

Here is the Order aggregate:

There are several example applications that illustrate how to use event sourcing.

It solves one of the key problems in implementing an event-driven architecture and makes it possible to reliably publish events whenever state changes. Because it persists events rather than domain objects, it mostly avoids the object‑relational impedance mismatch problem. It makes it possible to implement temporal queries that determine the state of an entity at any point in time. Event sourcing-based business logic consists of loosely coupled business entities that exchange events. This makes it a lot easier to migrate from a monolithic application to a microservice architecture.

It is a different and unfamiliar style of programming and so there is a learning curve.